Chizami Weaves - Where Craft is Instinct

There is not much historical data on the Naga tribes of North-East India. Several centuries ago they were primarily scalp-hunters and warriors. When the British arrived in India, they resisted colonisation fiercely. Their textile traditions relate much about their tribal culture. Many woven motifs are of daos and spears. The patterns tend to be simple geometric shapes such as stripes and squares symbolising weapons and hunting practices. Different Naga tribes have different patterns that are unique to each tribe. Some patterns are status symbols and insignia of valour in war. When head-hunting was practiced among the Nagas, symbols depicting trophies were also commonly woven onto textiles. Besides patterns, even colours and motifs vary from tribe to tribe. On traditional textiles, the Nagas use natural dyes such as indigo, mahogany, and lacquer that are extracted from plants and roots. Today, however, Nagas use yarn of all colours to market their textiles across India and around the world. When before, they would weave only shawls and sarongs (also known as ‘mekhalas’) today the Nagas have taken the fashion and home furnishings industries by storm with their fashionable bags, belts, table mats, and cushion covers.

In Nagaland, and across the Seven Sisters (Assam, Manipur, Meghalaya, Tripura, Mizoram, and Arunachal Pradesh) of North-East of India, textile weaving comes strictly under the purview of women. Unlike everywhere else in India, where weaving tends to be done by men, all Naga women learn how to weave from childhood as a matter of custom rather than as a means of employment. Weaving is a social activity whereby the women of the village gather outside their houses with their primitive ‘loin-looms,’ and weave the fabric requirements for their respective families. 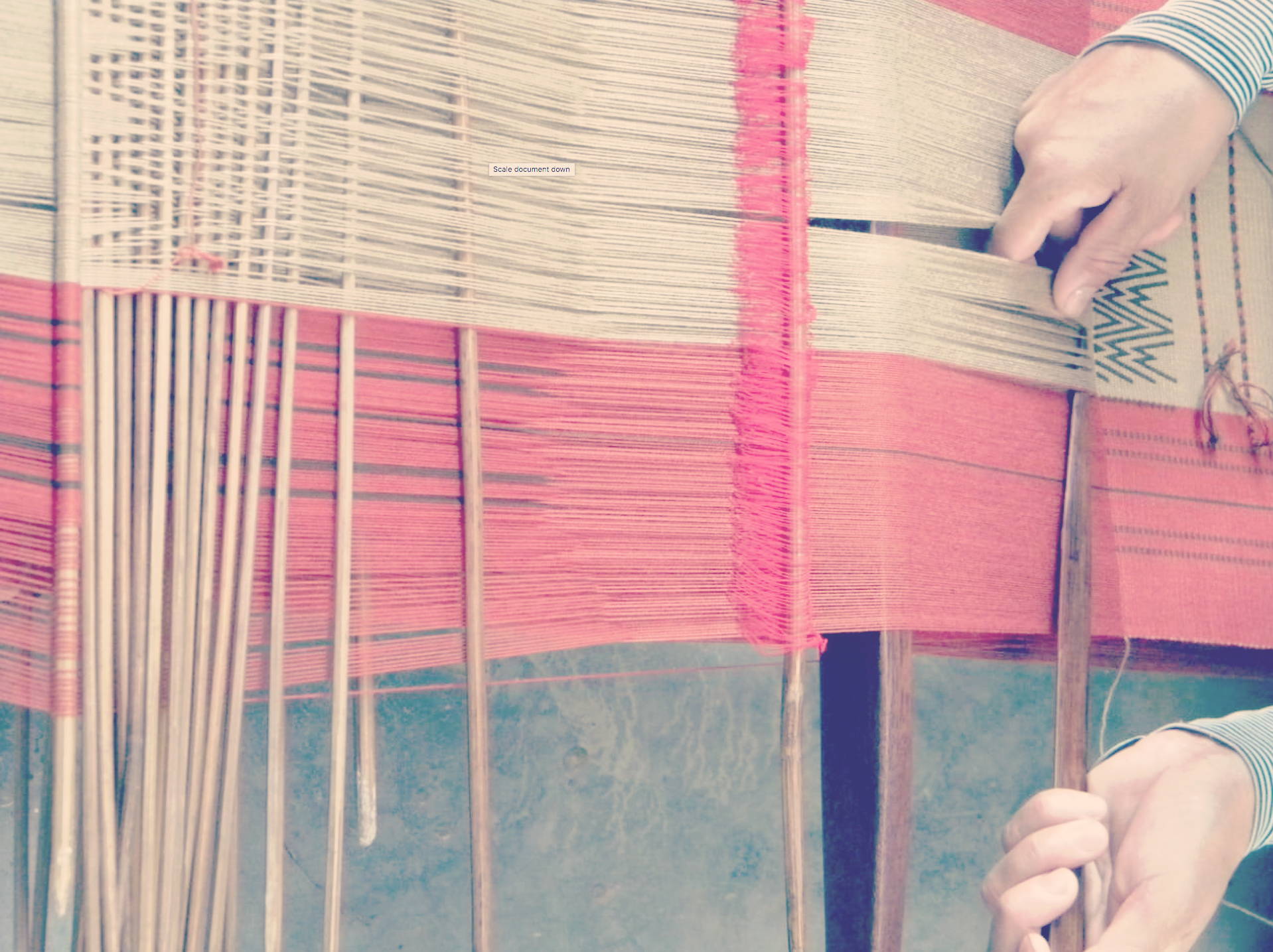 The loin-loom is the more predominantly used loom in Nagaland, the other type being the fly-shuttle loom. Loin-looms are low-cost, portable, and easy to make and assemble. With the help of a leather or cloth band, the loom can be strapped around a woman’s waist to her back (hence, the term ‘back-strap loom’) and enables the weaver to exert enough pressure while seated on a bench in front of the loom, and to adjust the tension on the loom as she deems appropriate by leaning backward and forward.

This is why the Naga loom is sometimes also known as the ‘Indonesian tension loom.’ Since the loom is narrow (not more than 16 to 18 inches in width), the cloths that are woven are also narrow strips that then need to be stitched together to create shawls and other garments. It can take anywhere from 10 to 30 hours for a weaver to weave just one strip of cloth depending on the complexity of the pattern woven into the weft of the loom. Traditionally the Nagas used cotton in their weaving, and over time, due to greater availability, they introduced wool and polyester as well. Cotton and hemp remain immensely popular. 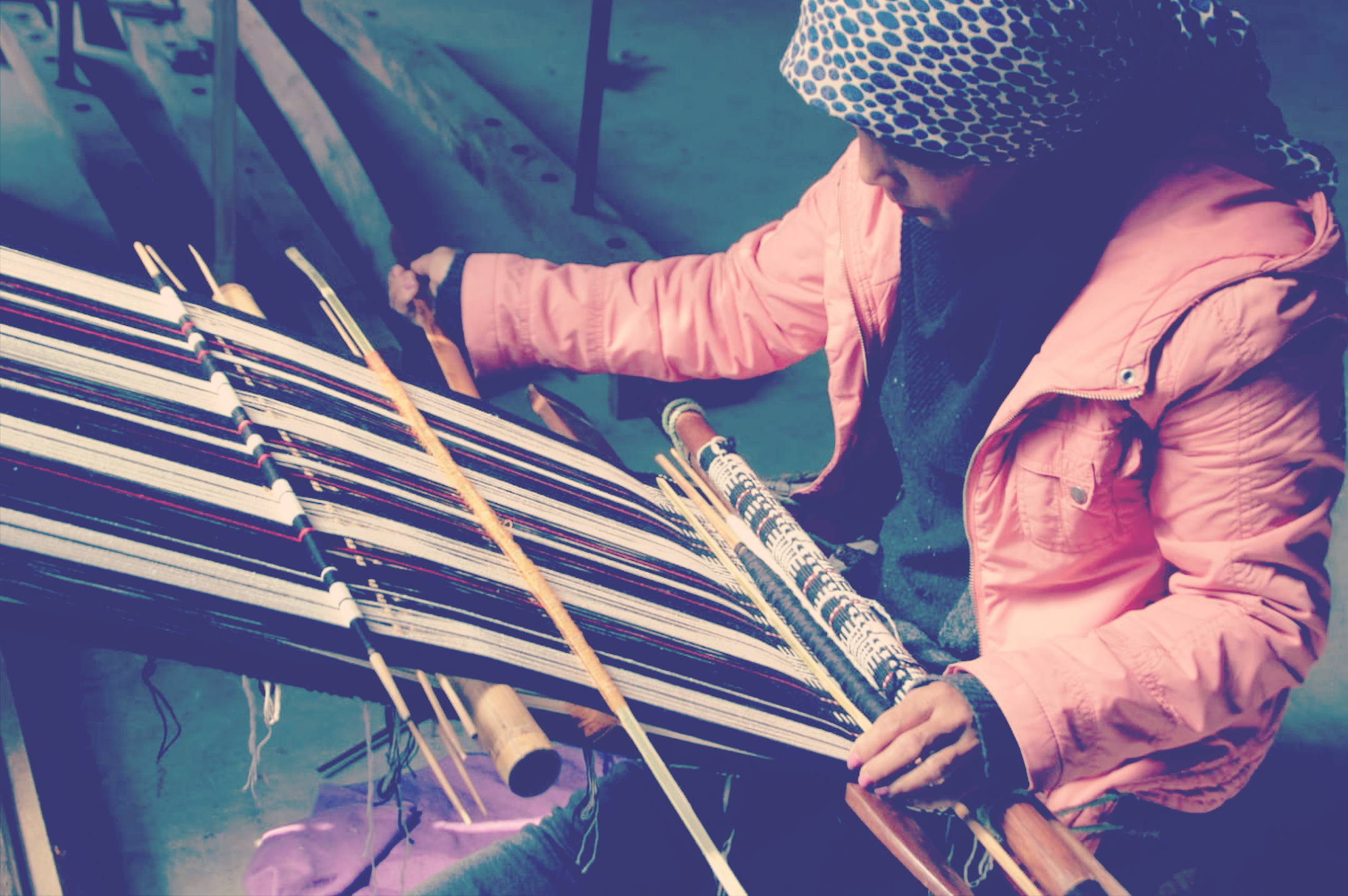 Our Naga upholstery fabric is woven using cotton yarn, which is light and ideal for Indian climes. The women who wove our fabric are members of Chizami Weaves – under North East Network- a women’s rights organisation. Chizami Weaves was conceived by the NEN in the village of Chizami. Starting with just seven weavers in 2008, Chizami Weaves today has 600 women in its network across 14 villages in the Phek district as well as urban settlers in the Kohima district of Nagaland. Naga weaving traditions have not only been revived by Chizami Weaves, but they have become a source of livelihood for marginalised Naga women. When the women get time away from their fields –primarily between November and March – their weaving allows them to benefit from a stable income throughout the year.