The Parsi gara is a rare fabric that employs near-extinct embroidery techniques that have their origins in China. As a result of its endangered status, the UNESCO (United Nations Educational, Scientific and Cultural Organization) has set up Parzor, an organization that researches and documents Parsi history, art, and embroidery before they become lost memory fragments. 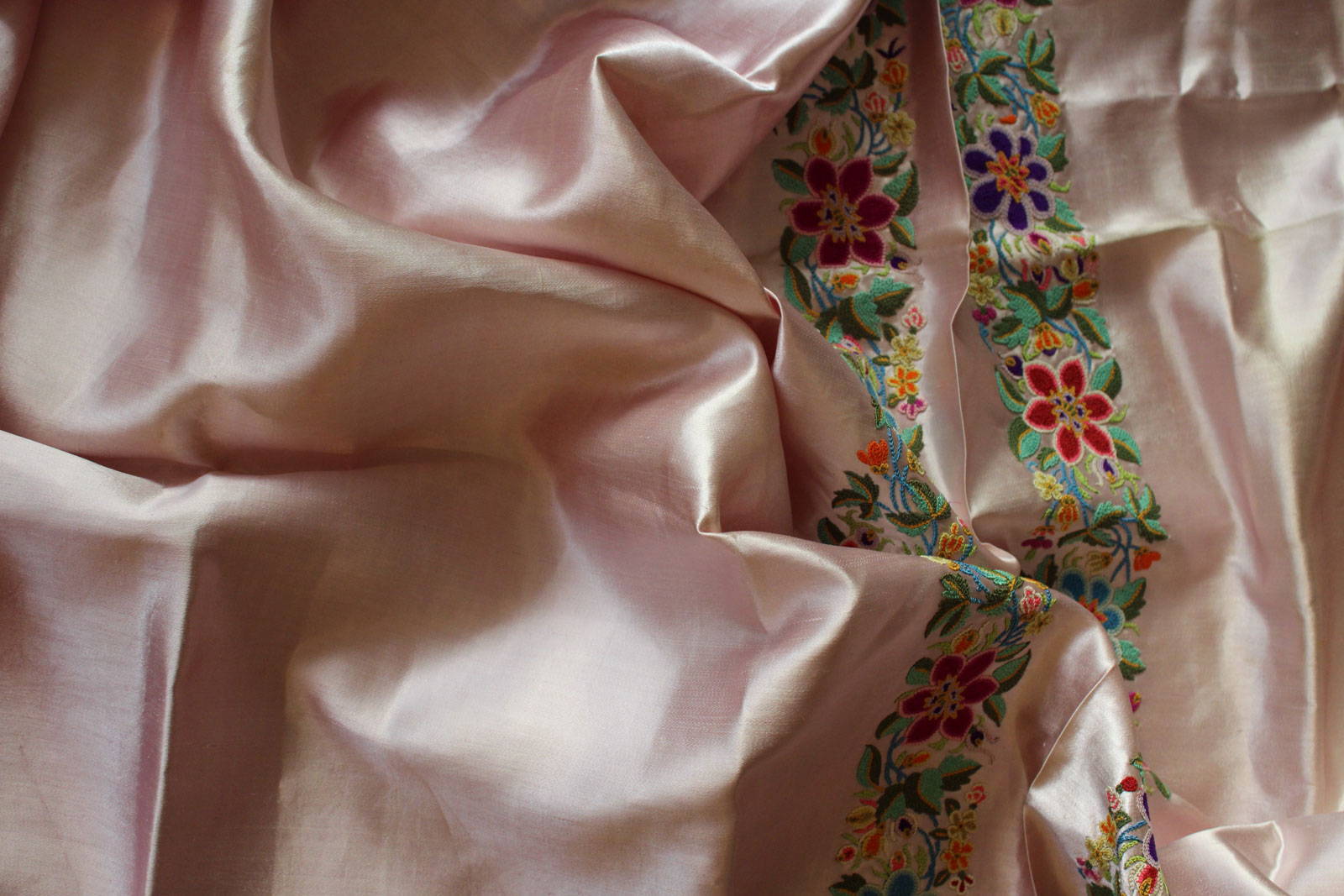 Parsis are the Zoroastrians of India who trace their ancestry to Persian Zoroastrians who fled religious persecution in Iran since the 8th century and were, according to legend, entreated to dress like Indians or rather, their women were asked to wear sarees by Jadi Rana of Sanjan. And thus, emerged the Parsigara, unique to the Zoroastrian community of India.

Parsis were predominantly farmers in Sanjan, Surat, and other coastal areas of Gujarat until the 17th century when a steady and continuous exodus of Parsis from Gujarat to Bombay began, and Parsis sought to establish themselves as leading ship-builders and textile merchants. It was then that the gara took on the character and aesthetic that it is known for today – a resplendently embroidered fabric rich in British, Chinese, and Zoroastrian influences.

The embroidery techniques employed were uniquely Chinese and, hence, most hand-embroidered garas are originally from China even after the embroidery technique was adopted by tailors or“karighars” in Surat. With the booming trade in cotton and opium, Parsi traders would ship rolls of “kors” or gara borders from the port of Canton to Bombay. Many of them carried fabrics, which were entirely embroidered in foreign Chinese motifs – illustrations of Chinese figures and pagodas – and these were known as “cheena-cheeni no garo.”

Silk-embroidered garas proved too expensive to many Parsis who began to attach “kors” on Italian crepe and georgette fabric. Besides being cheaper, they proved easier and lighter to wear as georgettes. Fully-embroidered garas can take up to two months to embroider with eight craftsmen working on them at a time. Today, garas are antiques and rare heirloom pieces that are difficult to find as complete pieces and tend to be worn and stained when they are.

The gara fabric used on the rocking chair is over a hundred years old making it one of the oldest gara fabrics in existence today. It has experienced much wear and staining, which has been treated to the best extent possible. Given the age of the fabric, it probably came from China as did most gara fabrics in the early 20th century. It is a sheer silk purple fabric that has been bonded with non-woven industrial fabric of 50 GSM in order to make it suitable for upholstering on furniture.

The type of embroidery done on this fabric is known as “akho garo” whereby the entire length and breadth of the fabric – and not just the border – has been intricately embroidered using twisted two-ply white silk. The weave in gara weaving traditions is known as “sali” – a leno weave, which is what lends the sheer quality to the fabric – and the stitch used for the embroidery is the satin stitch called“chin wen” by the Chinese. The embroidery is so fine that it was near-impossible to distinguish the back from the front of the fabric as is the case with all original Chinese gara fabrics.

The original purpose of this swatch of fabric was for tailoring a blouse or “badan.” The motifs embroidered on them are “marghi-marghi” meaning birds – specifically cranes – as well as chrysanthemums and birds of paradise – all considered to be highly auspicious symbols by the Chinese. 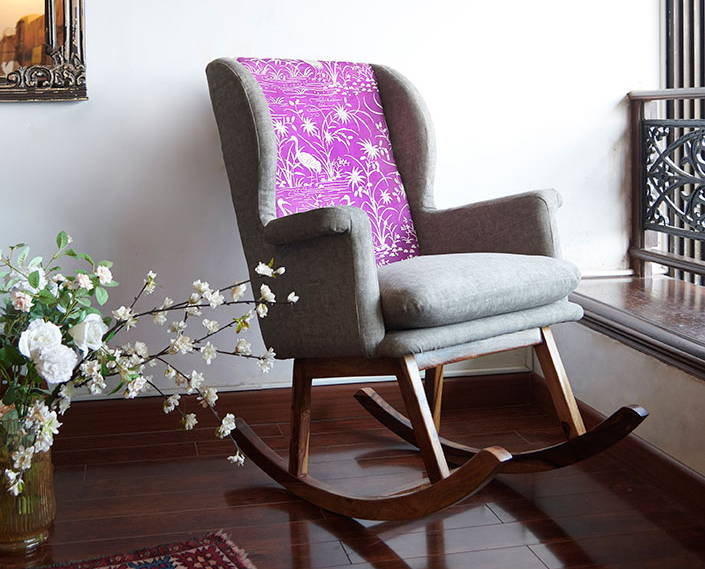 The gara fabric used on the ottoman is over a hundred years old making it one of the oldest gara fabrics in existence today. Given the age of the fabric, it probably came from China as did most gara fabrics in the early 20th century. It is a pink silk that has been woven using the jacquard technique, as a result of which, subtle patterns of iris flowers are woven across the fabric.

The original purpose of this swatch of fabric was for tailoring an “ijar” or pyjama for a child. The fabric is bordered by an ornate embroidery done employing the satin stitch (called “chin wen” by the Chinese) with two ply silk thread. This border, also called the “kor” of a gara consists of an array of multi-coloured motifs, including the carnation, the narcissus, and the peacock. To the Chinese, the peacock fanning its tail like the peacocks on this “kor,” symbolized wealth, status, and power. 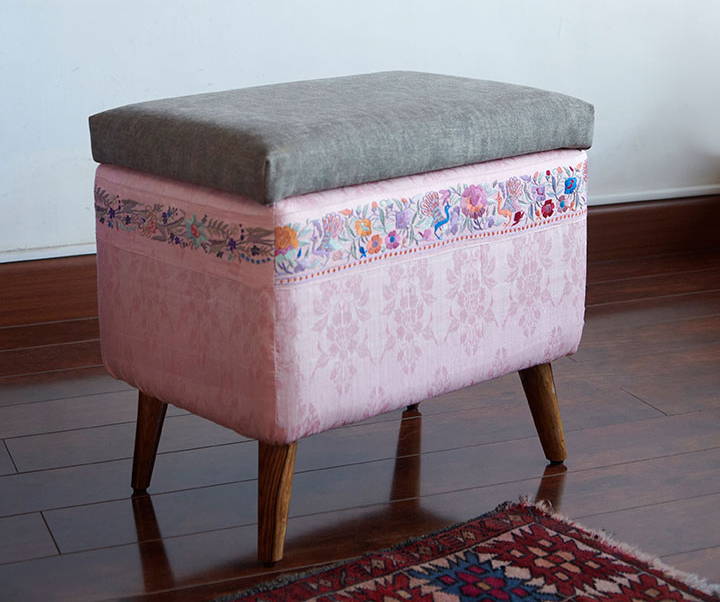 Two gara fabrics have been used to upholster the loveseat. The seat-cushions have been upholstered with a light pink silk sateen called “ghat,” which is essentially silk-cotton yarn woven in a satin weave. This was originally meant to be used for tailoring an “ijar” or pyjama for a child and had a “kor” or border that has been used to embellish the cushions on the loveseat. This gara fabric is over a hundred years old making it one of the oldest gara fabrics in existence today. Given the age of the fabric, it probably came from China as did most gara fabrics in the early 20th century.

The sky blue fabric on the body of the loveseat, however, is only a few decades old. It is Indian georgette saree on which a century-old silk-embroidered gara “kor” (border) was stitched using two ply silk thread. The “kor” was embroidered employing the “khakho” meaning “seed” stitch, which is popularly known as the Forbidden Knot or Peking Knot. It’s “forbidden” because the level of intricacy the stitch demands of the embroider can cause him to go blind from near-sightedness. The motifs of the “kor” are peonies and roosters. The rooster is auspicious to both the Zoro astrians as well as the Chinese. Since 1,000 BC, the rooster has symbolized light to the Zoro astrians; they believe that it has the power to ward off evil.

Besides the sky blue “kor,” even the “kors” embellishing the cushions are “khakho”-embroidered peonies that have been stitched using two ply silk thread. The peony is possibly the most popular floral motif that the Chinese have used. The Chinese regard it as the “King of Flowers” and represents wealth and prosperity. It is a motif that has made it to India through Parsi garas and to Spain just like the gara from Canton and via Manila. The Manila Shawl remains a costume essential for flamenco dances till today. 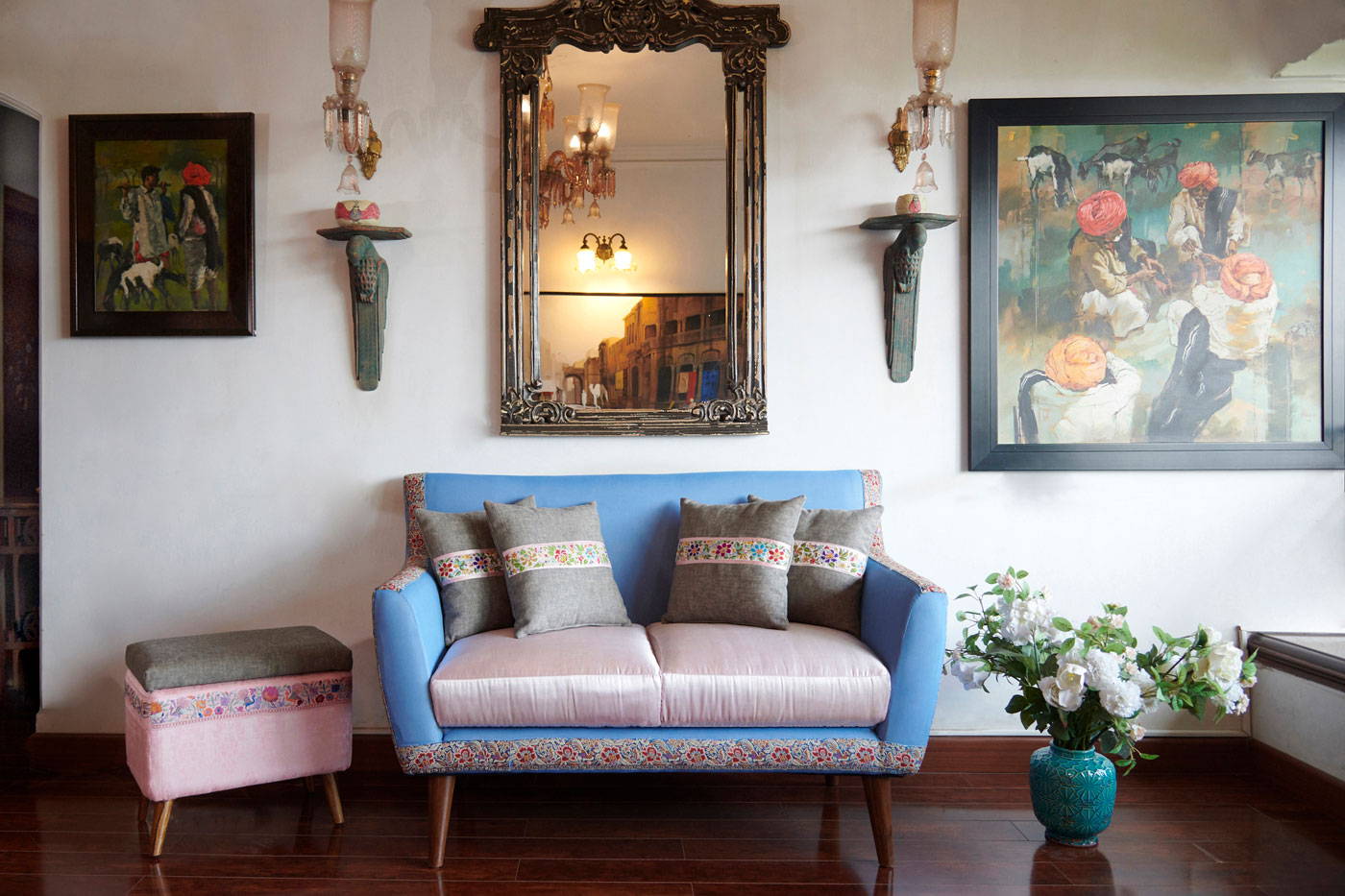