In 1972, Ranganath Kamath, Master Weaver of Goa, dismantled and sold off the last 16 handlooms in his possession. After 10 years of designing and weaving Kunbi Goan sarees, he called it a day. Kamath is the last Goan weaver of Kunbi fabrics alive; he is also the last surviving member of Pandolim’s first village Panchayat formed in 1961 when Goa was liberated by the Portuguese! In 2017, when Kamath had reached the ripe age of 90, the government of India felicitated and awarded him for devoting lifetime to reviving the, now-extinct, Kunbi weaving tradition. 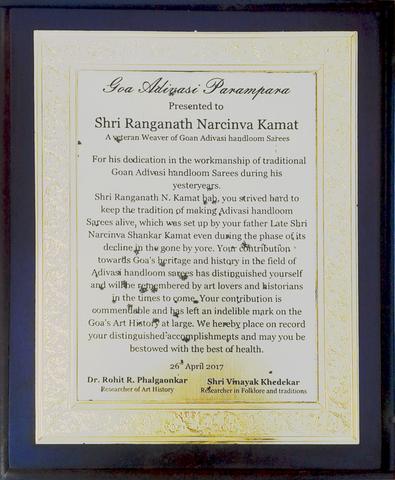 The 16 handlooms Ranganath Kamath sold off in 1972 had been bought by his father who had learned weaving and dyeing at the age of 12, and then subsequently trained locals in the art of Kunbi weaving. After selling off his handlooms, for the next 20 years, until the last of the Kunbi weavers died in 1992, Ranganath Kamath would spend his time ensuring that the remaining weavers of this textile indigenous to Goa would not be at the mercy of moneylenders and interlopers; they were efficient at ensnaring naïve weavers in interminable debt and wily in making it impossible for them to command reasonable prices for their finished weaves in the local market. Kamath would personally buy multi-coloured yarn from Belgaum and sell them to weavers in Goa. About 10 weaver houses with 50 handlooms in Margaon alone came to regard Kamath as their lifeline in the Kunbi weaving business. On Sundays, they would procure raw material from him and would also sell him their sarees in bulk. A simple man who barely made anything from selling these sarees, Kamath would buy them at rates far higher than any middleman or moneylender in the area and fetch high prices for them in Margaon market, the main market for Kunbi fabrics besides Mapsa market. He would take on the risk of storing and maintaining the sarees which, in the humid coastal climate of Goa, were at high risk of deterioration and being eaten by insects like white ants. At one point he even had to write of 500 sarees that were eaten into by white ants. 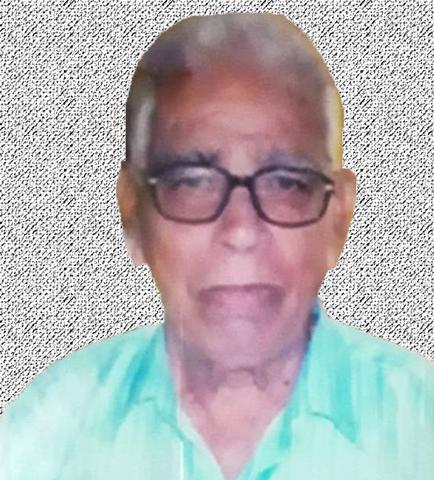 Kamath in his 60s, shortly after dismantling his father’s 16 handlooms

Besides storage and procurement, Kamath’s home, which is outfitted with tanks in the front yard, was also the centre for dyeing and processing yarn in Goa. Ranganath Kamath, himself, would dye the yarn in the multiple and various colours in which traditional Kunbi fabrics were woven and, thus, was critical in preserving the traditional colours and designs unique to Kunbi textiles. His mornings, from 7:30 am to 10:30 am were spent doing the physically-demand task of dyeing, and his afternoons, laying the yarn out to dry. In the evenings and over the weekends he would cycle to Margaon market on his scooter and sell sarees where local Goans and Kunbi tribals would buy them, fetching high prices especially for silk-woven Kunbi sarees. In 1970, a cotton saree would fetch Rs 70, while a silk saree would sell for more the double the price at Rs 200. At this point, Kunbi tribals themselves had ceased to weave their native textiles. They were extremely poor and did not have the infrastructure or handlooms to weave them. As a result, the Brahmin Kamaths, the Shettys (or Shettigars) of Candolim, and the Rasquinhas of Bastora were the last Goans to keep the weaving tradition alive. In the second half of the 20th century, as the government failed to provide promised support, powerlooms dwarfed the local weaving industry, weavers began dying out, and there were no apprentice weavers to train, Goan Kunbi weaving finally died out. Today Kunbi sarees can be found as powerloom products in some corners of Belgaum in the state of Maharashtra, and in Mangalore in the state of Karnataka. Thanks entirely to Ranganath Kamath, the last living Goan with intimate knowledge about this textile, archival research has been possible to preserve the memory of the Kunbi weaving tradition. 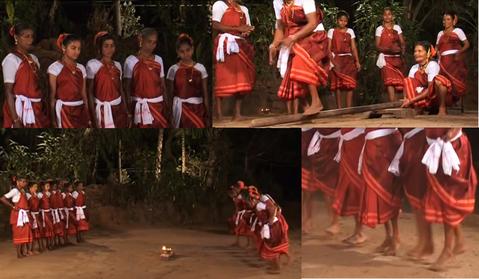 A Brief History of the Kunbi Textile

For 200 years after their arrival to India in the 16th century, the Portuguese had banned local saree weaving and tried to force imported textiles and dressing styles onto the locals. Kunbi weaving survived, albeit barely, till the 20th century. Even though many Goans converted to Christianity under the Portuguese, many of them held onto their dressing traditions and continued to wear local sarees and attire. The Kunbis, themselves, are the oldest tribe of Goa. They are one of the three tribes indigenous to Goa, the other two being the Gaudas and the Gaulys (also known as Dhangars). In Konkani, “kun” and “bi” mean “people” and “seeds” respectively; hence, “Kunbis” are known as those people who till the land. Today, Kunbis tend to be construction laborers and porters at railway platforms. Some Kunbi tribes are also to be found in the region of Karwar in Karnataka, where they typically farm paddy fields. They are identifiable by the signature Kunbi weaves that some of them continue to wear. 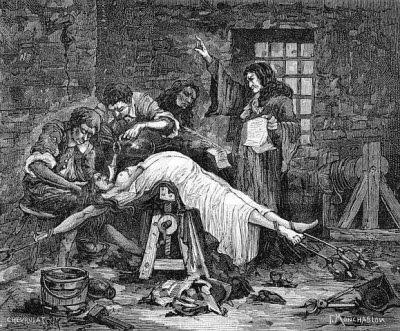 During the Portuguese Inquisition of Goa, Hindus, Muslims, and Jews were tortured and many were forced to convert to Christianity

Historian, Rohit Phalgaonkar, has done pulled out all the stops to revive prototypes of pre-colonial Kunbi sarees. He named two of them after Goa’s most popular goddesses, Shantadurga for his red saree prototype and Navadurga for his pink saree prototype. He discovered that originally, saree designs were named after the villages in which they were conceptualized. Some of the saree designs had rudraksh motifs patterned over them. Today, Christian Gouda ladies wear Kunbi sarees with large checks as distinct from other communities like the Adivasis, who wear sarees patterned with smaller checks. Kunbi sarees were originally worn without saree blouses, but in 1940 the Portuguese government made it compulsory for women to wear blouses.

Similar to the gamcha saree and to plaid, Kunbi weaving is also done in checked patterns. The colours used are bright yellows, reds, and greens, and sometimes they also have maroon, purple, and black. The primary colour of the Kunbi textile, like many tribal textiles around the world, including Aboriginal and Native American, is blood red, signifying fertility and vitality. The deep red of the dye is developed by mixing iron ore, starch (rice kanji), and vinegar. Yellow is derived from turmeric and lilac. Up to 156 varieties of natural plant dyes are available in Goa and Maharashtra, which the Kunbis would use for their yarn. Today, they can be found at Sawantwadi, a town on the border of Maharashtra. 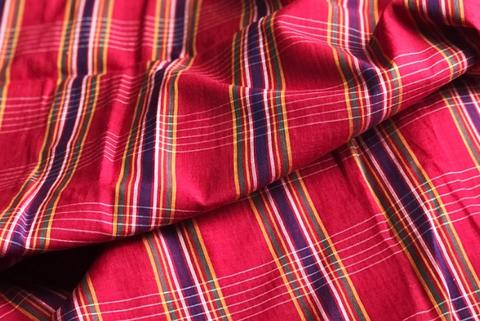 Kunbi, with its signature checked-pattern, is the Indian ‘plaid,’ the ‘Gamcha’ of South India; the rich, red colour symbolizes life and fertility

All manner of apparel has been fashioned out of Kunbi fabrics including sarees for women, skirts for young girls, and loin cloths for men, as well as furnishings such as towels and bedsheets. Sarees tend to be short in length – about 4.5 meters – unlike most other Indian sarees, which are anywhere between 6 to 8 meters in length. In 1933, until the introduction of artificial silk and rayon, Kunbi wedding sarees or “sados” were woven out of jute. Among Goans, when Kunbi sarees are most ubiquitous and sold fastest in the markets, they were usually heralding some festival or other.

Mysore Silk: The Penchant of Sultans and Maharajas, the Glimmering Crepe Sarees of South India

what are you looking for?